Jens Mohrmann is certain that the new name and a new brand identity were necessary. "Time and again, our clients were confused if they had booked the Alte Kelter for an event, for example, and then received mail from a company called Schwabenlandhalle Fellbach Betriebs GmbH," explains the Fellbach Event & Location GmbH CEO. He says that this had been one of the reasons for uniting all event venues and business areas under one umbrella brand.

The new name references the common location and the affiliation with its parent company, the city of Fellbach. "The Schwabenlandhalle has been indelibly associated with Fellbach for over four decades, and stands for consistent quality, like the city itself. It was therefore important to include this element in the new name in order to therefore also clearly emphasise the affiliation with the parent company, the city of Fellbach," says Jens Mohrmann. The "event" in the limited liability company's name indicates the potential in-person, hybrid and virtual event formats that can be planned and realised at these venues.

Not only the name indicates the link with the city of Fellbach; it was also important that the design of the logo references the city's corporate design. The two well-known Fellbach logo arcs were therefore incorporated, albeit in a slightly different and thinner form, along with the colour, the typical "Fellbach red". "However, also important to us was that the new logo for Fellbach Event & Location GmbH has its own character, despite all references to the city's corporate design. We also wanted the design to be modern and transparent, to work in the MICE industry and to reflect the synergies and connections between all of the venues," says head of the sales and marketing team Sabrina Müller.

In addition to the "Fellbach red", the assignment of an additional decorative colour emphasises the uniqueness of each event venue, but also the fact that they form a well-matched ensemble. For the new corporate design, already familiar as well as new colours such as the green shade for the Schwabenlandhalle, for example, were taken as inspiration and changed slightly to create an overall well-balanced look. A yellow tone was chosen for the Alte Kelter to reflect the impressive timber architecture, an orange for the Festhalle Schmiden, and a new shade of blue for the Waldschlössle.

The circular movement indicated by the signet invites people to immerse themselves in the brand world and to explore the venues. The circle is repeatedly used as a visualisation element. It represents the comprehensive, full in-house services – across all of the locations.

As an acronym and therefore the name the company will be known by, "feel" forms the bridge to the emotional level, because wherever people meet, talk to each other, experience culture or acquire new knowledge, the "feel" of the place plays an important role.

The new name and the corporate design make it possible to visually indicate the fact that the venues belong together, and they also embody the company's values – in keeping with the motto "feel.the variety – feel.the service – feel.the quality".

As different and varied as the venues are: Our quality standards and our service philosophy continue to be very important to us.
Jens Mohrmann, CEO Fellbach Event & Location GmbH

Fellbach Event & Location GmbH – a company with many facets. 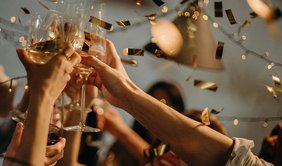 Our share feature offers you the opportunity to share our events, news and other contents with your business partners, colleagues or friends via various social media platforms.

feel.safe – See here for everything you need to know about the current Covid situation, because your health is important to us.